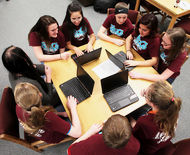 Grand Mesa Middle School students crowd around a library table as they familiarize themselves with four of the 60 new Google Chromebook laptop computers donated to the school Friday. Funding of $20,000 came from the Western Colorado Community Foundation and District 51 Foundation. That also paid for another 30 Chromebooks for East Middle School. Both schools are trying out the performance-based learning system, in which technology plays an essential role.

Learning is going to be a little easier for students at two District 51 middle schools, thanks to 90 laptop computers donated Friday by the Western Colorado Community Foundation and District 51 Foundation.

Grand Mesa Middle School received 60 new Google Chromebooks and East Middle School received 30 new Chromebooks to help with implementing performance-based learning. Grand Mesa and East are two of the eight demonstration schools in District 51 that are trying out a performance-based system, in which students progress through school based on mastering a subject, rather than how old they are.

Abby Kaul, a seventh-grade English teacher at Grand Mesa, said the computers will enable students to be more involved with the performance-based learning project.

“It’s more access for kids, because in a PBL learning system students are going to be learning at different paces and they’re going to be doing a variety of things in the classroom,” Kaul said. “The technology allows the kids to be working on their own projects and their own assignments.”

Grand Mesa seventh-grader Morgan Avery said she was grateful that the district and foundations were investing in her school.

“These Chromebooks will help us expand our horizons and learn the things nobody wants to put in our textbook,” Morgan said. “We are so grateful for you choosing us to invest your money into.”

Chromebooks are laptops equipped with a Google-created, web-based operating system. Almost all of the systems on the computers rely on an Internet connection, which means there’s no way for documents to get lost.

There’s also Google Classroom, which enables students to save assignments and track their progress from anywhere. Kaul said the program seemed “tailor-made” for performance-based learning.

“The more I experience PBL, the more I see the absolute necessity of technology,” she said.

Anne Wenzel, president of the Western Colorado Community Foundation, said the combined $20,000 donation was the start of the effort to equip District 51 students with essential tools.

“This is the wave of the future. This is how people communicate and work,” Wenzel said. “Going forward, it’s a critical tool for PBL to work. If you don’t have fundamental tools, there’s no way you can even get started.”

Jennifer Hensel Hildebrandt, coordinator for the District 51 Foundation, said technology was one of the main areas the foundation chose to focus on this year.

“We know that the ratio of technology to students in our district is not high enough,” she said. “If we’re moving kids into the 21st-century job market, we have to have technology in the classroom that they’re working with on a daily basis.”