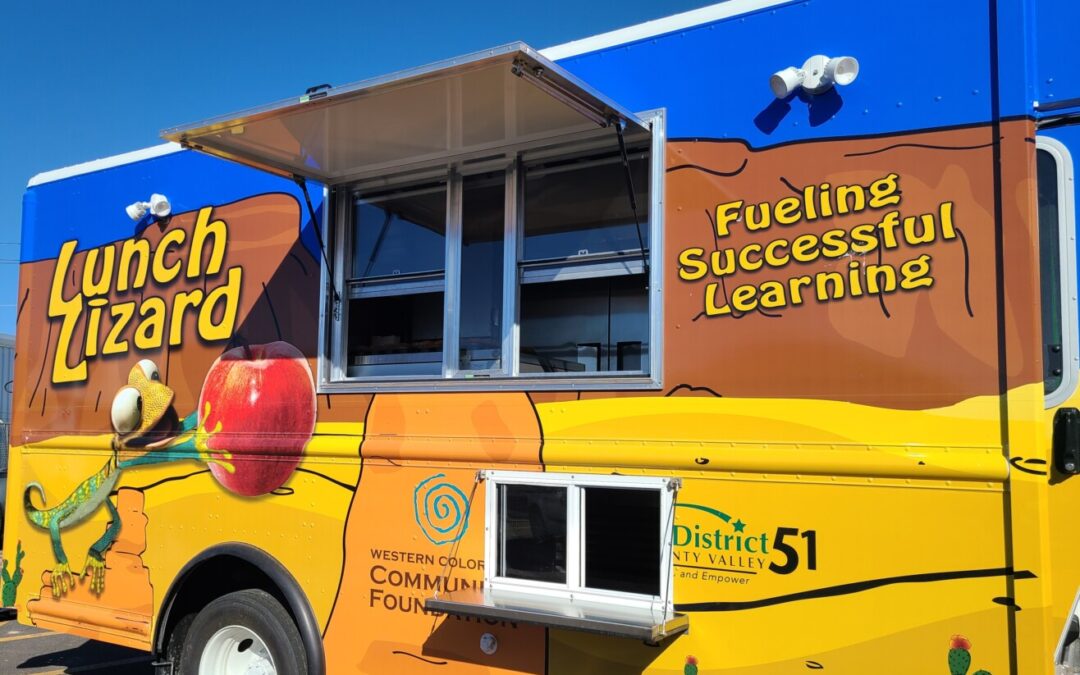 A new and improved version of the Lunch Lizard will soon be hitting the streets.

The Western Colorado Community Foundation (WCCF) on Friday presented a $150,000 check to Mesa County Valley School District 51’s Food and Nutrition Services, completing the purchase of a new Lunch Lizard truck that will serve meals in underserved and under-resourced neighborhoods in the Grand Valley.

The new truck was purchased with a grant from the Mike and Kay Ferris Family Fund, a donor-advised fund of the WCCF. Meredith and Kevin Davis, members of the Ferris family, were among the guests at the truck’s unveiling, along with Food Bank of the Rockies Western Slope Director Sue Ellen Rodwick, Alpine Bank Senior Vice President David Miller, Kids Aid Executive Director Tessa Kaiser and D51 Foundation Executive Director Angela Christensen.

“All the vehicles we’ve used for the last seven years have been funded through our community through Lions Club and many other organizations,” said District 51 Food and Nutrition Services Director Dan Sharp. “Today, the Ferris Family, we’re so thankful that they stepped up. They’re familiar with childhood hunger. Some of them have experienced it. That’s why they want to be a part of this today and to donate to it.”

“It puts tears in my eyes,” Sharp said. “It’s great to see the community support us in the way that they do. They see and know that there’s a hunger need in our community during the summer.

“During the school year, it’s covered through our normal school lunch and breakfast programs, and these kids that do need help and families that are struggling receive that. In the summertime, this program really fills a need in our community and the community has seen that.”

With assistance from WCCF President and CEO Anne Wenzel and Program Associate Jody Valente, Sharp launched the Lunch Lizard program for the 2015 summer to address a gap in summer meal provisions due to a loss of federal grant funding and other financial challenges. Food is cooked from scratch at schools and fresh fruits and vegetables are also available for kids.

In the first summer, between 4,000 and 5,000 meals were provided. In the past couple of summers since the COVID-19 pandemic began, the Lunch Lizard’s output has increased drastically. Last year, the program served 29,225 meals.

Additionally, the truck has been used to feed students at numerous schools throughout the school year.

“Our Lunch Lizard trucks are used year-round,” Sharp said. “We have several schools that don’t have commercial kitchens in them, so it’s great for us as taxpayers that the Lunch Lizard program’s vehicles can be leveraged to serve schools during the school year. Schools like R-5, Summit, New Emerson, Juniper Ridge, the Career Center can now have students that can receive healthy school meals throughout the year.”

In the past few years, the need for a new truck have become apparent.

The original Lunch Lizard truck is no longer in operation because of mechanical issues. The second truck, Lunch Lizard 2.0, was formerly a bread truck in Chicago in the 1990s and was retrofitted for the Lunch Lizard program. The generator is loud, the air conditioning often doesn’t work and breakdowns have sometimes prevented the truck from completing its route and feeding children.

While Lunch Lizard 2.0 will continue serving the community until it can’t anymore, the new truck features more storage, a generator quiet enough to meet National Park Service standards and a lower window in which smaller children can be served without Lunch Lizard volunteers having to leave the vehicle.

“It’s great to know that we’re going to have a vehicle that’s going to be very reliable and last us a long time,” Sharp said. “The need is still out there in the community. I think it’s even more pronounced now based on the challenges of inflation that’s hit us and everybody across the state and the country. We’ll look to do that.”

Additionally, the WCCF announced that it’s launching a “Complete the Fleet” fundraiser to raise $100,000 for a second new Lunch Lizard truck that will give the Lunch Lizard program two new, reliable trucks and, as long as truck 2.0 is running, three routes to serve the community as opposed to the two routes that have been in place since 2015.

Sharp hopes the second new truck will be delivered to the district by next January.

“We really need to get the second one ordered and built this summer,” Sharp said. “We have a truck builder in Denver that built this one for us. We want to be able to go out there with the money to be able to say, ‘Yep, we’re ready. We got it funded. Let’s build another one.’ ”

To donate to the “Complete the Fleet” fundraiser, visit wc-cf.org/donate or send a check to the WCCF at PO Box 4334, Grand Junction, 81502, with the memo “Lunch Lizard Food Truck.”

For more information on the Lunch Lizard’s 2022 routes and meals, visit www.bit.ly/lunchlizard.